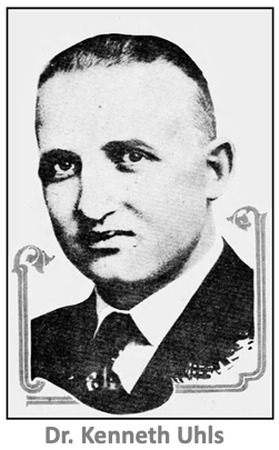 Fleeing Physician: The Curious Case of Dr. Kenneth Uhls
This is a series of articles recounting one of the most incredible, and yet mostly-forgotten, criminal cases to occur in the Overland Park area during the 1920s. The story of Dr. Kenneth Uhls, son of Dr. Lyman Uhls, owner of the Uhls Clinic amd Sanitarium at 75th & Metcalf, is a century-old true crime saga full of twists and turns. All the information presented in these articles is the result of hours of research and review of articles about the case which appeared in over a dozen different newspapers in the Midwest throughout the 1920s.

Part One: A Miser Is Murdered

By all accounts, 77-year-old William E. Gibbs was one of the most eccentric and miserly residents in all of Hutchinson, Kansas, in 1923. A member of Company C of the New York Cavalry during the Civil War, Gibbs had a clear reputation in town as a loner, an anti-social widower who lost his wife to sickness in 1898, as well as his only son to suicide in January. He had been reported to be a difficult man, demanding of his spouse and son, and thrifty to a fault. The pleasant exterior of his five-room cottage at 18 Tenth Avenue East Street belied its interior. The floors were bare. There were few scraps of furniture. Debris was scattered about. The kitchen stove was the only heat source in the modest home. Therefore, Gibbs spent most all his time there. And yet, his miserly ways were not the result of being destitute. In fact, it was believed the man was also one of the wealthier residents in Hutchinson. The vast majority of his wealth was on paper in the form of stocks, bonds and other investments for which he kept meticulous records in a little red book he tended to scour over nightly by candlelight. It is said William Gibbs was so miserly that when daylight turned to dusk, he would retreat to the kitchen and allow only one candle to complement the light provided by the dying embers of his stove. Neighbors never recall seeing any light coming from his home in the evenings.

​          The night of December 30, 1923, brought a blizzard across the Kansas plains. Mrs. Mary Hartenberger, who lived next door to Gibbs, was awakened at 11 o’clock by her sick child. She noticed the light in Gibbs’ kitchen window and found it to be very strange. Gibbs never had a light at night. She thought perhaps he was sick, but she didn’t venture out into the brutal winter weather to inquire. She was up before dawn to get breakfast for her son who was going away, and she noticed the light was still burning in Gibbs’ kitchen. She decided to throw on her coat and walk across the yard, where she peered into his window. She saw his overturned chair and his legs, stretched starkly toward the stove.

Mrs. Hartenberger then ran and told Dr. C.S. Evans, who lived on the other side of her home, and he in turn called Reno County Sheriff Jesse Langford. They found the front door slightly ajar and, upon entering, found Gibbs in his kitchen murdered. His skull had been crushed. The place had not been ransacked. Gibbs was still wearing his gold watch and still had money in his pocket. No evidence of a struggle was to be seen in the room and no instrument which could have dealt the death blow was found in the home or on the premises after exhaustive search by Sheriff Langford. What they did find were the victim’s ledgers, in which he kept account of his financial transactions, spread out on the kitchen table. The rubber bands by which they were bound were still around Gibbs’ wrist for safekeeping. And next to the ledgers was the little red book, whereby Gibbs’ kept records of all his holdings.

Further careful searching of a barn on additional property owned by Gibbs revealed a well-hidden tin box containing stock certificates matching those in the little red book. However, certain stocks were missing. Specifically, $102,000 worth of preferred stock in the Uhls Clinic and Sanitarium in Overland Park, Kansas, could not be accounted for.  If the little red leather book had been carried away by the murderer, the loss of the securities might not have become known. But either because the murderer did not know what it contained or did not bother to take it after bludgeoning the old man to death, it was left on the kitchen table.

Detectives then began a further search through all the papers and found a copy of a letter penned by Gibbs to a man named George E. Davidson of Ottumwa, Iowa. In the letter, Gibbs asked for the return of the stocks which he assumed Davidson had carried away by mistake when he visited Gibbs in his home in October. Apparently, no answer came from Davidson, so Gibbs wrote a letter to Dr. Kenneth Uhls, head of the sanitarium in Overland Park. Detectives found a letter of reply from the doctor, with a very evasive answer. Detectives felt they now had something to go on: a theory that William Gibbs was murdered, and his precious stocks were taken by the killer.

The sheriff’s force and the city police began working on a number of possible clues to the case. A neighbor had noticed a well-dressed man, carrying a grip, who visited Mr. Gibbs at his home the previous Saturday afternoon. A certain Dodge sedan with yellow wheels had been observed stopped in front of the Gibbs home a number of times. Mrs. Hartenberger stated that she noticed Gibbs had been having a number of callers recently. She remarked to him about it while both were standing in their front yards, after which Gibbs stated, “Oh you know how times are hard now. Some of these people who wouldn’t speak to me on the street take the trouble to come and see me now, in order to try and borrow money.”

After a few days the Hutchinson detectives also began to investigate the Uhls Clinic and Sanitarium, the facility which had issued the stocks to William Gibbs. They placed their first telephone call not to the facility itself, but rather to the Johnson County Sheriff’s office.  The timing of that call would prove to be critical in the investigation, as you will learn in the next installment of the story.