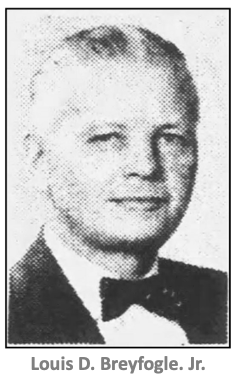 This is the second of a series of articles recounting one of the most incredible, and yet mostly-forgotten, criminal cases to occur in the Overland Park area during the 1920s. The story of Dr. Kenneth Uhls, son of Dr. Lyman Uhls, owner of the Uhls Clinic and Sanitarium at 75th & Metcalf, is a century-old true crime saga full of twists and turns. All the information presented in these articles is the result of hours of research and review of articles about the case which appeared in over a dozen different newspapers in the Midwest throughout the 1920s.

Dr. Kenneth Uhls and Louis D. Breyfogle, Jr., knew each other well. Both were of the same age and had previously run in the same social circle. It was only natural that Dr. Uhls would appoint the Breyfogle Brothers as the supplier of milk for patients and staff at his Uhls Clinic & Sanitarium. However, beginning in the fall of 1923, payments for the milk deliveries began to fall behind. By year’s end, the clinic’s debt to the Breyfogles for nearly 1000 gallons of milk exceeded $500, the highest “credit” the dairy family had ever extended. With the start of the new year, the Breyfogles demanded a settlement from Dr. Uhls. On the morning of January 2, Dr. Uhls called his friend, Louis Breyfogle, Jr., and told him that he would give him $500 in United States Liberty Bonds as partial payment of the debt when Louis made his milk delivery that evening. The Breyfogles agreed to this arrangement. At 5:30 p.m. Dr. Uhls gave ten $50 bonds to staff member Dr. Emma De Vries, with instructions to give them to Louis and get a receipt. Between 6 and 7 p.m. Louis arrived with the milk, and Dr. De Vries gave him the bonds in an envelope. Louis, feeling some relief, left the sanitarium in his car and proceeded south on Military Highway.

It was a very cold January evening, with blustery winds with a light snow falling. After traveling about a quarter mile, Louis suddenly observed a Ford motor car stopped on the road. Unable to apply his brakes in time, the two cars collided. After the impact, two men masked with handkerchiefs and flourishing revolvers ordered Louis to throw up his hands and walk over into a ditch on the side of the road. Hoping to forestall a search and possibly save the bonds from the thieves, Louis offered the bandits $50 in currency and his pocket watch. “You know what we want. Hand over the envelope you got at the sanitarium,” the bandits demanded. Louis reluctantly handed over the bonds. The bandits then ordered Louis into their car and drove further south a distance before ordering him out of the car. They then turned the car around and sped north on Military Highway.​

Louis Breyfogle, cold and shaken, ran back to his car and followed the bandits’ car at a safe distance. He observed it turning into the sanitarium. Louis was convinced the car belonged to Dr. Kenneth Uhls. He then drove to Ralph Jessup’s filling station just south of the sanitarium and called his father, Deputy Sheriff Louis Breyfogle, Sr., and several members of the Central Protective Association to report what happened. His father instructed him to wait at the filling station until he arrived with the other lawmen. Within thirty minutes, the posse headed to the sanitarium where Louis spotted the car used by the bandits parked near the sanitarium garage. Louis pointed out the freshly dented fender as an easy point of identification. The bandits even left their handkerchiefs in the car, eliminating all doubt that it was the getaway car.

The posse entered the sanitarium and asked to speak to Dr. Uhls. After a brief wait, the doctor entered the room and had a surprised look on his face. Louis Breyfogle explained the events of the last hour since he left the sanitarium with the bonds. Dr. Uhls apologized for the frightening incident and, with the obvious evidence presented by Louis, conceded the bandits were most likely patients from his sanitarium. Dr. Uhls asked the lawmen to allow him to conduct his own internal investigation into the matter, assuring them he would make every effort to find the stolen bonds.

At 12:30 a.m. that evening, Dr. Uhls drove to the Breyfogle home and returned the bonds. In explaining how he recovered them, Dr. Uhls told the officers he called all patients and employees into his office, notified them of the hold-up, and said: “I will leave this office for ten minutes. When I return, I expect to see the bonds on my desk.” Upon his return, the bonds were on his desk in the original envelope.

Authorities were highly suspicious of Dr. Uhls’ story, as they had been contacted by the Reno County Sheriff’s Office just days prior regarding $102,000 worth of Uhls Sanitarium preferred stock that was missing from recently-murdered Hutchinson resident, William Gibbs. Local authorities found the missing stock in Dr. Uhls’ possession at the sanitarium. Uhls claimed that recently a man, who asserted he had power of attorney from Gibbs, appeared at the clinic and transferred a large block of stock from Gibbs’s name to his own. It was well known in the Overland Park community that the sanitarium had been facing financial difficulties for over a year since the passing of Dr. Uhls’ father, Dr. Lyman Uhls.

The next morning, authorities returned to the sanitarium to ask some questions of staff. It was quickly revealed by Dr. Emma De Vries that she was not aware of any staff and patient meeting being called the night before. And equally mysterious, two patients from the sanitarium had disappeared overnight.


With this and other information gathered, Johnson County Attorney C. W. Gorsuch felt he had enough cause to issue arrest warrants for three persons: Dr. Kenneth Uhls, “John Doe” and “Richard Roe”, all on a robbery charge of $500 in bonds from Louis Breyfogle, Jr. Deputy Sheriff John Steed arrived at the sanitarium that afternoon with the three warrants. He conferred with Dr. Uhls but did not arrest him. Instead, he carried the warrants back to Olathe and stated he was convinced Dr. Uhls had nothing to do with the robbery of Breyfogle. Informed that Steed had returned to Olathe with the warrants, county attorney Gorsuch was angry and insisted the warrants be served. “Dr. Uhls tried to talk to me on the telephone this morning,” Gorsuch said, “but I refused to talk to him because he had reversed the toll charges. I’ll talk to Dr. Uhls when he is brought in here by the sheriff or when he calls on the telephone and pays the toll himself.” Dr. Uhls did not appear disturbed when he was told a warrant had been issued for his arrest and proclaimed he had no intention of going to Olathe to answer the charge. “I own $700,000 in common stock in this sanitarium. Therefore, I went out and robbed Breyfogle of $500,” the physician said with a laugh. “This is ridiculous.” Shortly after making that statement, Dr. Uhls left the sanitarium without telling anyone he was leaving. Detectives from both Reno County and Johnson County now felt they had a solid lead in both a robbery case in Overland Park and a murder case in Hutchinson. But where was Dr. Kenneth Uhls?