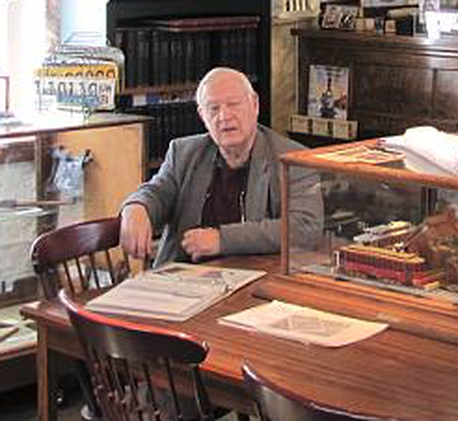 A Visit With Florent Wagner
By Robin Coddington
Florent Wagner has been studying the history of Overland Park since 1980.
Florent worked as a Vice President and Trust Officer of the Overland Park State Bank & Trust Company.
At that time he handled many estates and it was while he was doing business with his customers that
they would share bits of information that stuck with him. Florent realized there was a rich history of Overland Park. In 1982 he started interviewing people and was amazed at what he found.
Below are highlights from an interview I had with Florent in which he recounted the meeting of two men who would forever change the direction of what was in their time a cow town. Try to picture what Overland Park was like in the early 1900s before any land was developed.
In 1906 a man named George Metcalf owned 240 acres located at 75th street and what was then called Military Highway. (We now refer to Military Highway as Metcalf Ave.) Mr. Metcalf met William Strang during one of Strang’s many visits to Kansas City and the two became friends. Strang was a very successful railroad builder and financier. Rumor has it that Strang was involved with the building of Fenway Park in Boston and the financing of the subway system in NYC.
After the 1903 KC flood, Metcalf invited Strang and his mother to join him at his farm in Overland Park. Mr. Strang brought his mother, a cook, and a maid, and they lived in a railroad tent on the farm for three weeks. During that time Mr. Strang was looking for an area to build a retirement community. Being an astute businessman he realized what a gold mine the undeveloped area of Kansas City was.
Strang began to develop several subdivisions of pasture and farmland located at 79th and Military Highway (Metcalf) extending to 87th Street. At that time you could build a house for $1900 - $2500 which sounds cheap to us today.
Strang was one of the first suburban developers to impose building restrictions that included indoor plumbing and outbuildings. At Conser and 79th Street is one of the first houses built on these plots and is still standing today.
During this time anyone employed by Strang was given a plot of 1/2 acre or more. A consummate promoter, he built Santa Fe Trail Hall in Overland Park for dances to foster his business connections. At these dances he would have several of his real estate agents attending. Business thrived.
This marks the beginning of the building of a new city. Our city. The friendship between Metcalf and Strang continued for many years. It is a great reminder to us today of how vast the ripple effect is of our actions.
The time Strang spent at the Metcalf farm impacted his decision to begin to build a subdivision in this area.